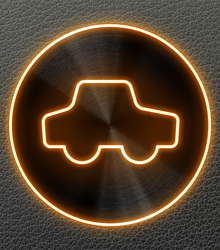 Imagine all the stresses you face on your daily drive to work? The grid lock, the haphazard drivers, the random cyclist, the honkers, the “The-center-lane-is-mine” kinda drivers. All these of these niggles are brought together at once in this drive-or-crash game. Imagine all of your pet peeves in the same location – the best bit? All controlled by you! This game gives you a greater appreciation of a relaxing traffic jam that you could be stuck in. The game follows a simple concept – get each character from A to B without a crash. Simple? Nope, not really.

At each stage in the level, you start off controlling a different character and getting them to their destination. After each commute, the car/bike becomes a ghost car in the next characters’ commute. Seems pretty straight forward until you get to about 11 cars in, all moving about in the same space, at the same time. Real time traffic chaos never seemed to get this scary! Each car/character has an interesting storyline, and as you get behind the wheel of each, you learn a bit more about the driver. Starting with dentist, Dr Schneider, then to Postwoman Betty who always is on time, and can stop at Mr Beck’s home, to Mrs Beck who’s forgotten her keys and is on her way back; the story line comes together to form a brilliant plot. The gameplay is pretty simple as well. Simple left and right controls to get your commuter from point A to B. Each commute takes about 5 seconds and is part of the 60 second round. Bonus time extenders add 10 second boosts to the clock – if you can drive over them. After the first trip, you move to the second trip and the first car begins its run again, with you. This repeats itself for 12 in the first set. Make sure to remember where you have moved the other cars to avoid collisions. Once all the cars have reached their destination, you hit a checkpoint. As you cross checkpoint, more vehicles are added to the scenario in the same amount of space. All need to get to their destination within the clock’s timer. Each successful set ends with a checkpoint and you move to a new location until you come to the end of the game. Each crash slows your car down, and you can rewind back to the start of that commute, but you lose one second on the timer as penalty. This might be a better risk than the time spent driving as a slow car because of the crash. The free version unfortunately does not allow re-starting a game from the check point, which is a bit of a let-down, considering how engaging the game actually is. Available on both iOS (iOS7 and up) and Android devices (Android 2.3 and up).